Students will discover some aspects of light, through the creation of a spectroscope, a fundamental instrument in astronomy. Spectroscopes allow us to study the chemical composition and physical status of the celestial bodies we observe. The spectroscope built in this activity is not like the ones used by astronomers, but it will enable us to break up the light from luminous sources in a rainbow of colours, and discover a few features of light which otherwise we could not see. It is a portable instrument, that students can use when and where they like, so as to go hunting for spectra.

Building a working portable instrument, in order to view spectra of the light from luminous sources

Light is a type of radiation which allows us to see what is around us. The bodies from which light comes are defined “light sources” and can be of two kinds: natural and artificial. 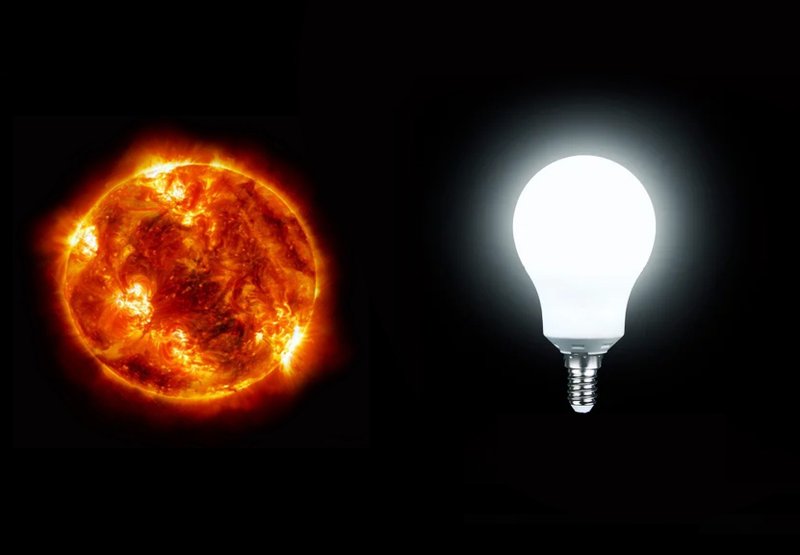 Light seems to be white (or transparent) but is actually composed of all the colours of the rainbow, mixed together. The human eye perceives objects which do not emit light as coloured, only when the light (either natural or artificial) strikes them, is partly reflected and enters our eyes. For example, you see an object as red because when the light strikes it, it is all absorbed apart from the colour red, which is reflected, then enters your eyes and appears as such. This happens for all the other colours, apart from black and white, which - in fact - are not real colours, but rather the absence or sum of all colours, respectively. For a black object, all the light falling upon it is completely absorbed, and for a white one, all colours are reflected. 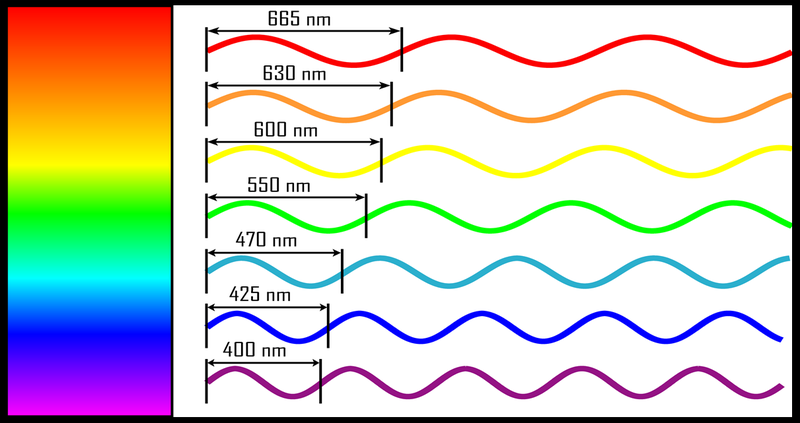 Light can be represented as a wave and in the image you can see multiple waves that represent different colours. The distance between two crests of the wave (or between two starts of the wave shape) is called wavelength, and is a fundamental feature of light. Each colour has its own wavelength, from the shortest (violet) to the longest (red). The unit of measure beside the number is the nanometer, which corresponds to a length a billion times shorter than a metre.

Passing from violet to red, the wavelength increases, and in the same space fewer waves crests are “included”, because a complete cycle takes up more space. An analogy could be made with drops of water falling into a glass: each time a wave “peak” arrives, we could imagine that it would transfer a “fixed” amount of energy… as if it were a drop of water falling into a glass. In a given time, the blue light carries more drops than the red light; namely, the blue light carries more energy than the red light.

Usually, colours within the light are all mixed and cannot be distinguished. In order to arrange the colours of light we need something to separate them. It might be a tiny drop of water, a piece of crystal (you know grandma chandeliers with crystal drops?) or a “piece of glass” called prism. 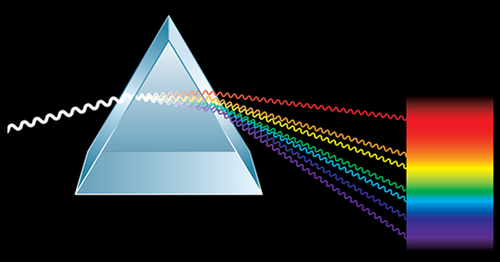 The prism is a transparent object. The (white) light beam enters and is “refracted” (the physical phenomenon which takes place is called “refraction”): when it gets into the prism, each colour in the lightbeam undergoes a deviation, which depends on the wavelength of the colour itself. Red waves are diverted less than the violet ones. The same happens when the rays of light come out of the prism. In this way, the light getting out is no longer white, but rather a band of ordered colours, from red to violet: the rainbow, which scientists define as “spectrum”.

The spectroscope you will build in this activity will work exactly as a prism, breaking down the light in different colours. Thanks to it, you will see with your own eyes that different light sources may have different kinds of spectra. If you observe sunlight (BE CAREFUL: NEVER LOOK DIRECTLY INTO THE SUN, NOT EVEN WITH THE SPECTROSCOPE!), you will see a rainbow, while energy-saving light bulbs do not produce a complete rainbow, but only a few coloured lines against a black background. They are called linear spectra as opposed to the rainbow that you will observe from the Sun, which is defined as a continuous spectrum.

In the two cases above, the spectra have different forms because light is emitted by different physical processes. In the case of the Sun (or a "normal" light bulb), the visible light is produced because the source is very hot (thousands of degrees). In the case of the energy-saving light bulb, there is a (cold) gas inside the bulb whose electrons, which normally orbit at a certain distance from the nuclei, are excited and jump into more distant orbits, and then fall back after a while upon the original orbit. While doing this, they emit light. However, the light they emit depends on the difference of energy between the two orbits, and has therefore a precise colour, which represents the energy of that jump.

Each gas, from any chemical element, has its own electrons, more or less far from the nucleus, and can make only certain jumps. Therefore the spectrum of a gas (i.e. the coloured lines emitted by the electrons of that gas, during their jumping) is typical of that gas. This is only its behaviour, and has that combination of colored lines (spectrum). In this sense, we can say that the spectrum is the fingerprint of the gas, of that element. If we see certain lines, we can deduce which chemical, or combination of elements, emitted them. You will therefore understand why it is important to watch celestial objects with a spectroscope: indeed, it allows us to learn what they are made of. In fact, in astronomy, this instrument is much more powerful: not only does it enable us to understand which elements constitute the source, we can also derive its temperature, the gas density, and whether it is approaching or moving away from us.

A tutorial with the instructions on how to assemble and use the spectroscope is shown in this video (the video is only available in Italian; however, you can follow it with the text below).

First of all, attach the sheet on which the spectroscope is printed on a black cardboard. It is important that it is black, because the inside of the spectroscope we are going to build must not reflect the light that enters. Preferably use a glue stick, applying a thin coat of glue (without forming lumps on the sheet).

With your scissors, cut out the shape indicated on the sheet, along the continuous lines of its edge. We recommend that you do not cut along the dotted lines. Now you need the help of a grown-up, for a few minutes. Can you see the two small long and narrow slits? You should cut them with a cutter (a utility knife), in order to create two thin slits (just as specified). The cuts must be precise, along the lines, and straight.

At this point, we should fold all the dotted lines you can see. The folds must be perfect. I’ll show you a trick to make them perfect: take a ruler and pull it close to the dotted line. With a ballpoint pen (the colour does not matter, as long as it has the tip of a pen) go back and forth for five times, pressing on the cardboard. You will see that, in the end, as you fold the cardboard, it will bend perfectly. Do the same for all dotted lines, both the ones with short hatching, and those with mixed hatching (the two side wings).

Now you should fold along the lines. With short hatching, fold the cardboard down. On the other hand, fold the two wings up (mixed hatching).

Prepare a strip of tape of about 5 cm. Close the small box at the two short wings, and put the tape under the crack (we recommend not to cover it), so that the box ist well closed.

Prepare a strip of tape of about 10 cm.

Now take the CD/DVD and stick your finger in the middle hole, keeping its reflecting part facing up. Then insert the CD/DVD into the box, as if it were the beak of a duck who wants to eat it.

The small tab must embrace the CD/DVD. In the lower part, pull the cardboard a little bit towards the tab, and use the tape to hold both, starting from the tab and getting to the other piece of cardboard, under the box. Place two strips of tape on the side wings too, so that they are firmly attached on the CD/DVD, and no light can enter.

Check that there are no openings from which light can enter the box, apart from the two slits.

Use your Spectroscope to hunt for spectra

Now that you have built your instrument, let us see how to use it. In one of the two slits, it says “eye”. Turn to a light source, for example the lamp of the room where you are. Hold the CD/DVD with either one or two hands, whichever you prefer, before you, and incline it by about 45 degrees, with the slit “eye” towards you. Put your eye to the slit and watch - inside the spectroscope - the surface of the CD/DVD. You should see the spectrum of light that you are observing. If you cannot see it, incline the CD/DVD slowly, until you find it!

The Sun is a light source, which we can observe very easily. However, do pay attention: do not point the spectroscope directly at the Sun, just point it at the sky (be it blue or cloudy).

After having built the spectroscope, it can be used in the classroom to observe various light sources, whether natural or artificial. The teacher will be able to see if the student recognizes the spectrum (either linear or continuous). According to the age of pupils, we can also test the understanding of the mechanisms for the emission of spectral lines.